This tutorial will teach you about the 8 and 16 bit timers on an ATmega168 microcontroller. Because the ATmega168 is very similar to the ATmega48, ATmega88 and ATmega328, the examples should also work on these. For other AVR microcontrollers the general principles will apply but the specifics may vary.

Consider a wrist watch. At regular intervals it ticks and the hand moves to the next number. At any point in time you can read the accumulated count (the time) and once the time reaches a certain threshold, an event occurs (the alarm rings). Timers on AVR microcontrollers are a little like this.

The ATmega168 has two 8-bit and one 16-bit timers. This means that there are 3 sets of counters, each with the ability to count at different rates. The two 8-bit counters can count to 255 whilst the 16 bit counter can count to 65,536.

When the counters reach certain thresholds we can trigger interrupts, which cause Interrupt Service Routines (ISRs) to be executed. Timers are very handy because they allow operations to run automatically, independently of the main processing thread.

The ATmega168 has 2, 8-bit timers: Counter0 and Counter2. Each of these timers are controlled by the following registers.

We’ll focus on Counter0 and the most commonly used registers.

Each counter has 2 thresholds. for Counter0 these are stored in registers OCR0A and OCR0B. When these threshold are reached “something” happens. This “something” is defined in TCCR0A, TCCR0B and TIMSK0. TCCR0B also allows you to set the rate at which the timer is updated.

TCCR0A and TCCR0A are shown below.

WGM02, WGM01 and WGM00 control the counter’s mode as shown in the table below.

We’ll focus on the normal and CTC modes. A detailed discussion of timer modes can be found in section 14.7 of the ATmega168 datasheet.

COM0A1, COM0A0, COM0B1 and COM0B0 control the behavior of the OC0A (PD6) and OC0B (PD5) pins. These pins can be controlled from the Output Compare Registers (OCR0A/OCR0B). The settings depend on the modes being used and is outside the scope of this tutorial. Section 14.9.1 of the ATmega168 datasheet describes these bits in detail.

An ATmega168 with default fuses runs at 8MHz with the system clock prescaler enabled. This means that the timer can be updated, up to 8,000,000 times per second. By setting CS02, CS01 and CS00 we can slow down this rate, as shown here.

TIMSK0 controls which interrupts are enabled. Each counter has 3 interrupts, one for each Output Compare Register (threshold) and one for overflow. The full list of available interrupts can be found in the AVR libc <interrupt.h> Interrupts Documentation under the section labelled “Choosing the vector: Interrupt vector names”.

In this example we run run a sweep of the 8 red LEDs on the main routine. We will then blink the green LED on/off 4 times every second. The circuit diagram and source code is shown below. 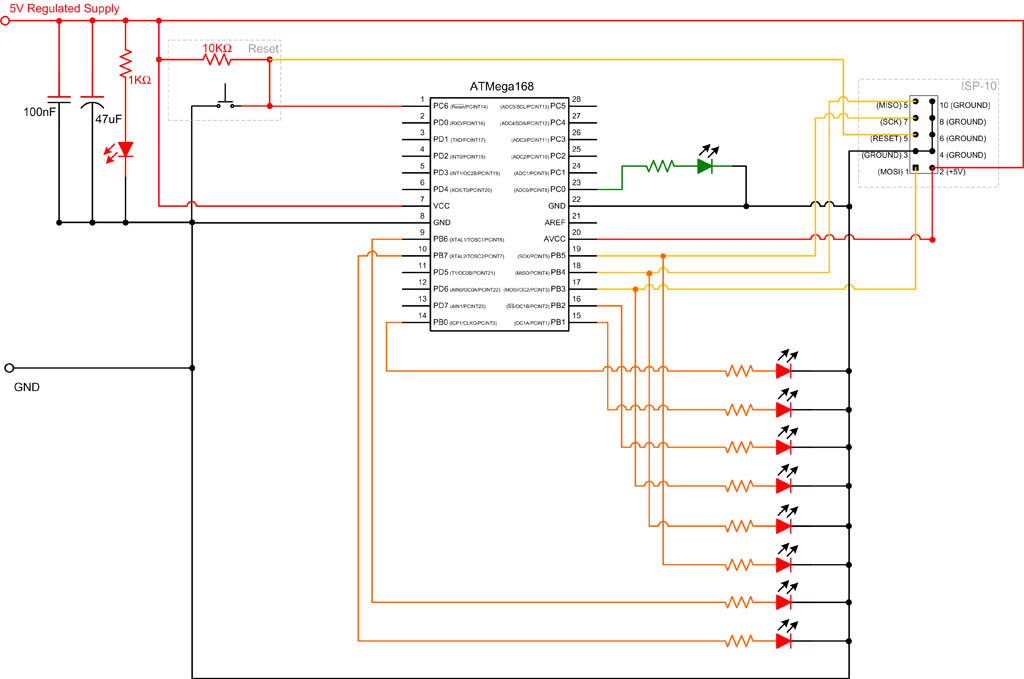 Line 15 sets the CTC mode. This ensures that the counter is reset when it reaches OCR0A. After we have setup the timer registers, we call sei() to enable the global registers.

On line 37, you will see “ISR(SIG_OUTPUT_COMPARE0A)”. This is the interrupt service routine and will get called each time the interrupt is triggered.

In this example we will use TimerCounter0 Compare Match A and Match B interrupts. We we turn the LED on at Match B and off at Match A. This will produce the following waveform.

The ATmega168 has a single 16 bit timer, which is referred to as Counter1. It works like the 8 bit timer, except the counter has more bits in it. This intervals to be set with longer duration and greater precision. The registers used by this timer are:

In some ways this list looks like the registers used by the 8 bit timers. We will now examine the important differences.

TCCR1A, TCCR1B and TCCR1C play a similar role to TCCR0A and TCCR0B. These are shown below.

Some of the differences include

ICR1H and ICR1L don’t have any equivalent in the 8 bit timers and allow you to capture the timer value on certain events.

This example is similar to the previous one. Because we are using the 16 bit timer, we can increase the cycle time.

On line 15 and 16, where we set the value for the Output Compare Registers, we don’t need to set value for the high and low registers. The AVR Libc
library abstracts these as a single 16 bit value.

I hope you’ve enjoyed this tutorial. Timers are a complex subject and I have tried to keep them simple by just looking at a slice of what they can do. I encourage to read the documentation and experiment. I’ve listed 2 good resources below.

The AVR family of microcontrollers use a modified Harvard Architecture which uses 3 types of...

This tutorial will teach you how to use the I/O ports on an AVR microcontroller....

Breadboards are invaluable for experimenting with electronic circuits. They allow you to create temporary circuits...