EEPROM (Electrically Erasable Programmable Read Only Memory) Is non-volatile memory, meaning it persists after power is removed. The ATmega168 microcontroller has 512 bytes of EEPROM which can be used to store system parameters and small amounts of data. This tutorial shows you how to read and write EEPROM.

Our code examples will be very simple. We have an ATmega168 microcontroller connected to an LCD display. In our first example we will:

This counts how many times the device has been powered up or reset. In later examples we’ll be adding other datatypes and interracting with the EEPROM in slightly different ways.

No need to reinvent the wheel here. We will use the circuit from the Character LCD Displays – Part 2 post we did last year, but build it on a breadboard instead.. 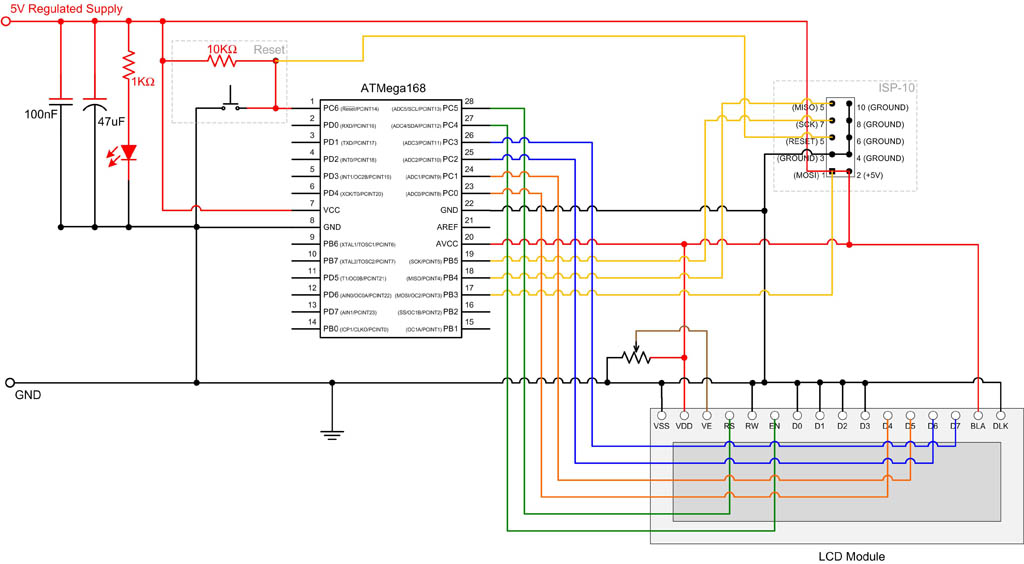 Next we add the necessary connections for the LCD module. 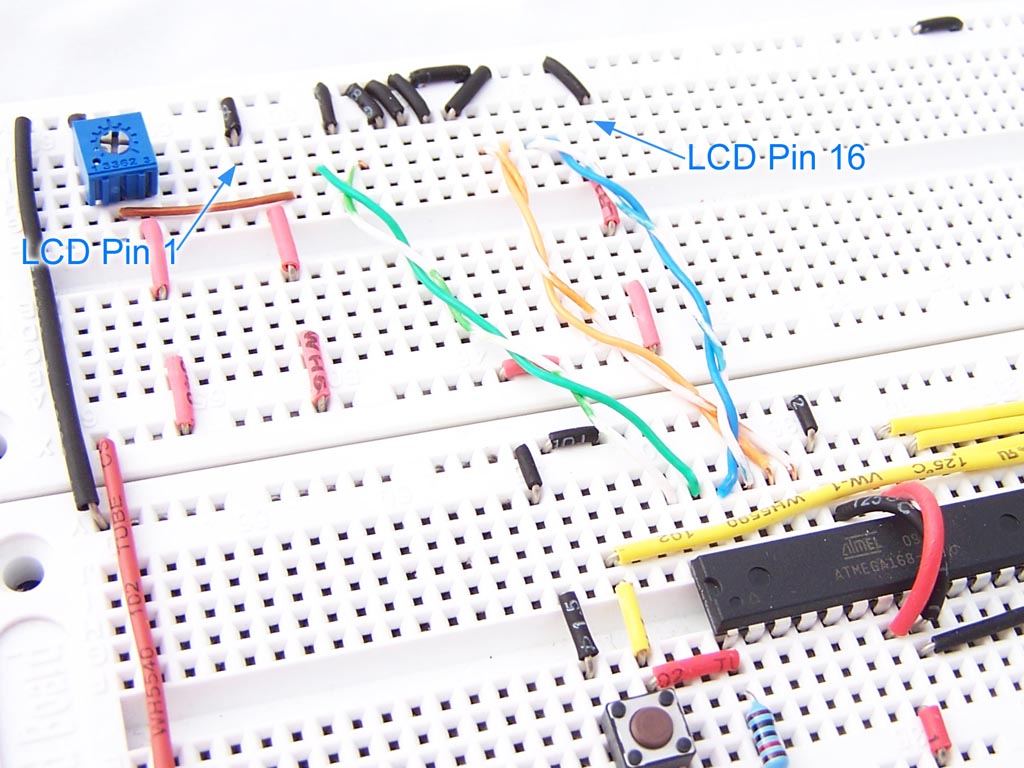 Now we solder a single row header to the back of the LCD module and insert it into the breadboard. 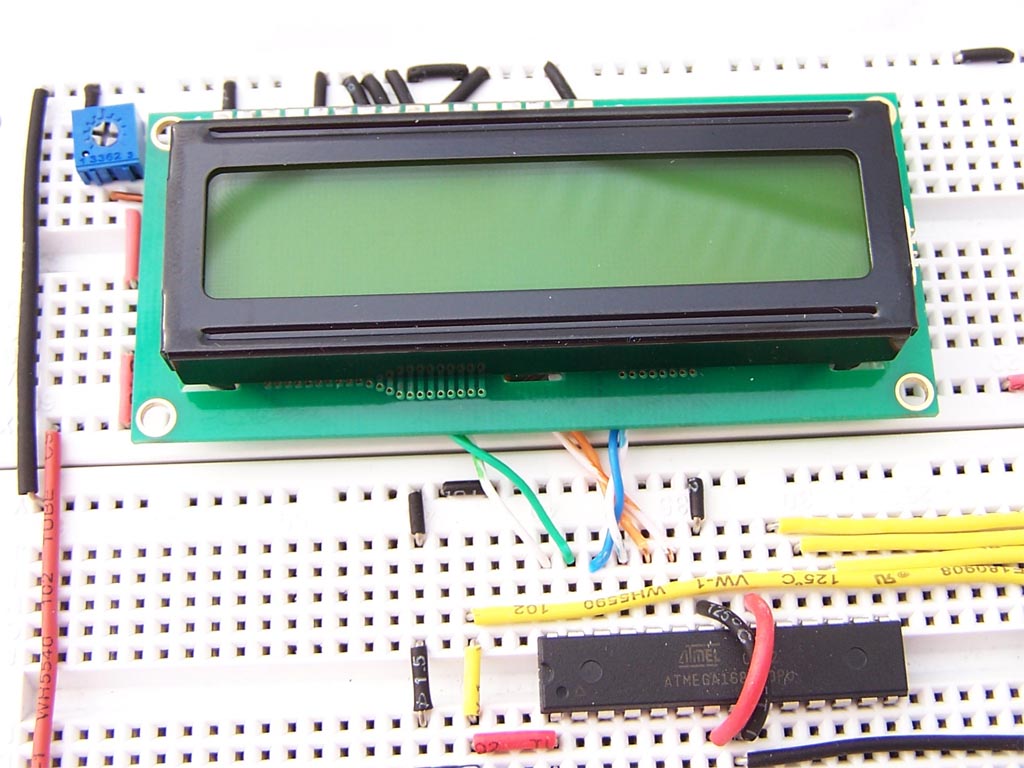 AVRdude terminal mode allows you to establish a session with the microcontroller and issue commands to it. To enter terminal mode use the following command

and to dump EEPROM to the standard output

as shown in the example below. 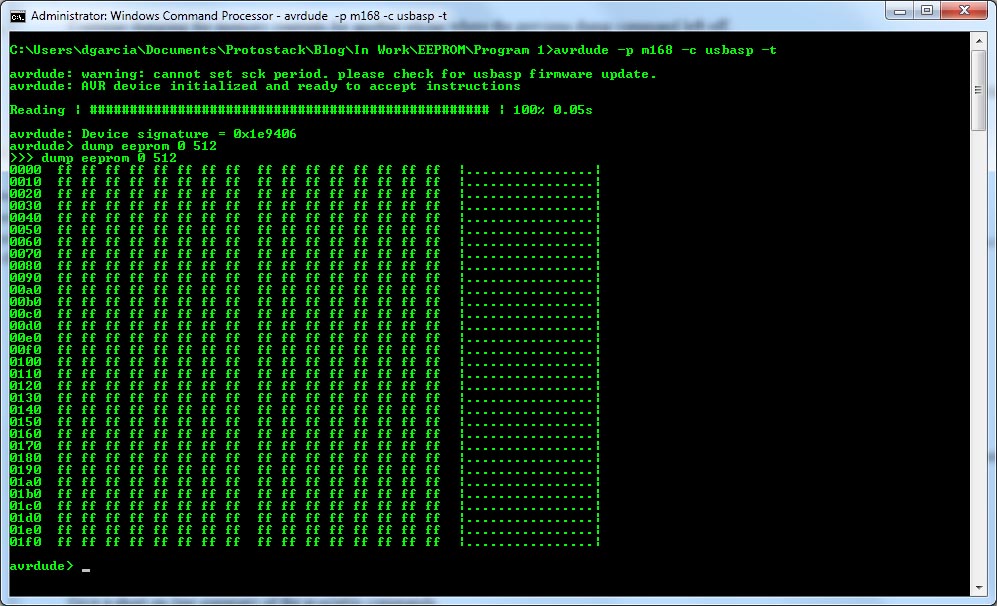 You will notice that all EEPROM values are “0xFF”. This are the default values for an erased EEPROM.

To following program demonstrates how to read and write a double byte value to EEPROM.

Before we can use any of the EEPROM functions in the avr-libc library, we need to include the EEPROM header file. This is done at line 1.

At line 10 we define the num_executions variable and load it from EEPROM location 0. This variable is a double byte unsigned integer.

You will recall that the default values for an erase byte is 0xFF. At lines 11 & 12 we set num_executions to 0 if being run against an erase EEPROM (e.g. first execution).

Lastly at line 14 we write away the updated num_executions value.

Reading and writing other datatypes

In the previous example we read and wrote a double byte datatype. In this example we will write:

The interesting one I think is where we read and write the string value. This is done between lines 27 and 36. The 2 function we use are:

In c, “void *” is used to denote a generic pointer. When we pass real pointers to the function we need to cast them as “void *”. This is shown in lines 28 and 36.

The eeprom_read_block and eeprom_write_block function are very versatile as they can be used with any datatype. For example you could read/write structs or multi dimension arrays using these 2 functions.

After running the code and pressing reset a bunch of times, let’s examine the EEPROM using AVRdude. 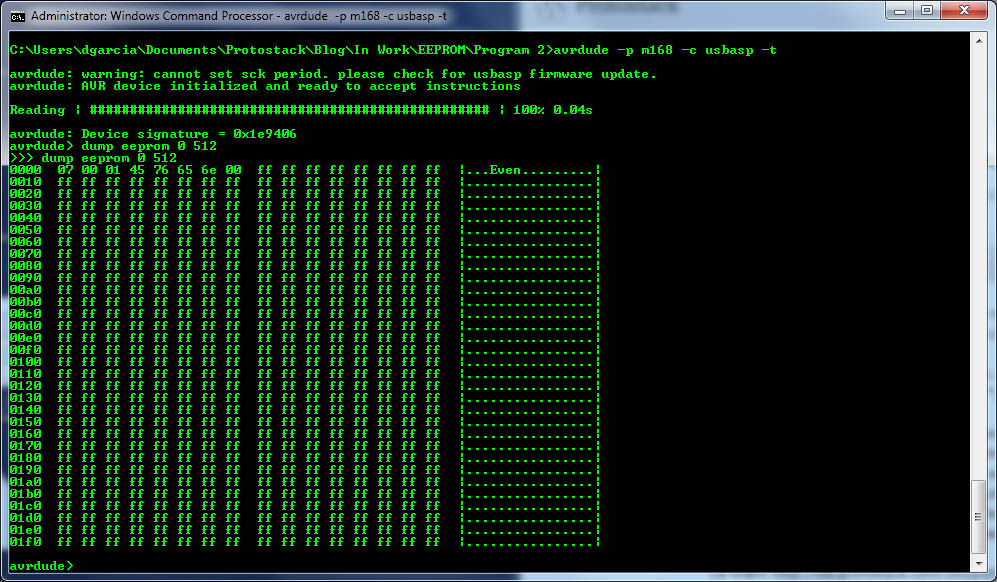 In large projects, it can be tedious to define the addresses for each EEPROM stored variable. The EEMEM attribute is used to auto allocate addresses for the non-volatile variables. Consider the following code example.

Even though these variables look like any other variable, we cannot use them directly. We still need to use the EEPROM read and write functions, but this time we use a pointer to the variable to denote the EEPROM address. This can be seen in lines 15, 19, 21, 26, 29 & 37.

By default when we run AVRdude to upload the firmware a chip erase is performed. This erases FLASH and EEPROM memory.

The AVRdude -D option can disable the erasure, but this is not recommended as FLASH sections that are not being written with the new firmware will remain as they are. A much better approach is to use fuse settings.

By default the Atmega168 ships with fuse settings of 0x62 and 0xDF (low and high). By setting the EESAVE bit, we can prevent an EEPROM erasure during the chip erase cycle. To do this, use the following command.

and to revert back to EEPROM erasing mode

Note: Care should always be taken when writing fuse settings. It is very easy to render your microcontroller inoperable by setting incorrect fuse settings.

When the program is compiled, an eep file is generated. This contains an EEPROM map which can be uploaded to the microcontroller if required. The contents of this file can be set by initializing the non-volatile variables as follows.

The eep file can be uploaded to the microcontroller by adding “-U eeprom:w:main.eep” to your AVRdude command string. If you are using the “make program” command to upload your firmware, simply uncomment line 208 of the makefile as follows

This will ensure that the eep file is uploaded with every “make program” command.

This tutorial will teach you how to use the I/O ports on an AVR microcontroller....

The AVR family of microcontrollers use a modified Harvard Architecture which uses 3 types of...

Breadboards are invaluable for experimenting with electronic circuits. They allow you to create temporary circuits...