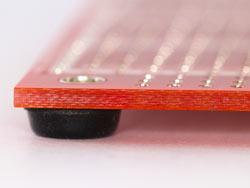 August 19, 2013. Brisbane, Australia – Protostack, an innovative Australian developer and retailer of microcontroller components continues its commitment to the prototyping fraternity by introducing more new products to their line-up. Now available from Protostack are female headers and rubber feet for your PCBs.

Protostack’s female headers are 40 pins long, with an industry standard 2.54mm (0.1”) connector pitch designed to match male header strips. This pitch is also compatible with DIP packages, breadboards, IDC connectors and many other devices. You can even use them for connectors on custom made cables.

The 40 pin headers can be connected to a myriad of different components such as snappable male headers and male to male ribbon cables.

Custom sized headers can be simply created by simply cutting down these low cost 40 pin headers using a sharp knife or wire cutters to suit your specific application.

Circuit boards are made to have components soldered to them. This inevitably leads to a jagged underside face with wires/terminals and solder all exposed. To protect your work surface and stabilise your boards while you are working on them, Protostack now offer self-adhesive rubber feet 8mm in diameter and 2.8mm high that can be attached to the bottom of your board in matter of seconds.

Both of these new products are now available for purchase from Protostack and can be ordered online from protostack.com.au, along with an ever-expanding collection of prototyping supplies.

Protostack is an innovative developer and retailer of microcontroller components for prototyping applications. Amongst their product range are uniquely designed components specifically designed to speed the prototyping process to help you turn your concepts into marketable systems.